A pro-vaxxer manifesto of sorts is making its way around social media lately “proving” anti-vaxxers wrong using their own logic: 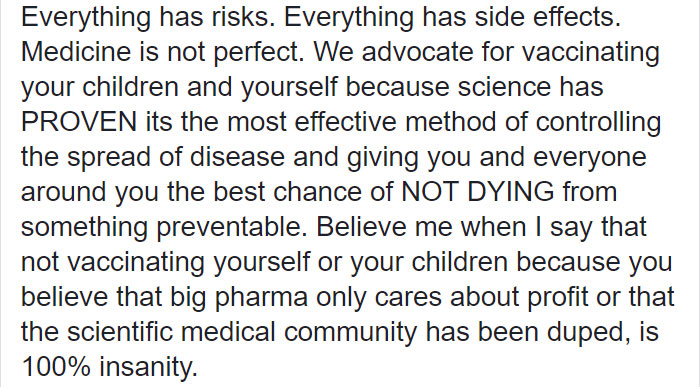 Meggy Doodle’s argument is basically this: if you’re going to distrust vaccines because you’re skeptical of Big Pharma, then you should distrust ALL drugs because you’re skeptical of Big Pharma. The same industry that produces the vaccines produce life-saving antibiotics and anaphylaxis drugs and TPA which can “reverse every symptom of your stroke within minutes”. If you don’t take vaccines, then you shouldn’t take ANY drug.

But here’s what Meggy didn’t consider:

You don’t give everyone three courses of antibiotics, two doses of anaphylaxis meds and a shot of TPA at one specific time, regardless of the contraindications or the condition of the patient. That would be medical malpractice. You wouldn’t say, “You’re 18 now, I’m going to prescribe you every psychoactive medication on the market whether or not you have any psychiatric problem.” And, “Oh, you’re allergic to penicillin? That doesn’t matter, have some anyway! The same company makes that makes it makes this other life-saving drug, so you must take all of them at once!”

Using Meggy’s flawed reasoning would be like saying if you don’t think natural remedies work because Essential Oils are a fraud, then you can’t eat healthy food because that’s natural too. It’s a false dichotomy; it’s part-to-whole; and it’s just probably several other fallacies I’m not thinking of.

It’s true that if you’re skeptical of pharmaceutical companies, you should be consistently skeptical, but Meggy and her fans don’t realize that the vaccine industry enjoys a double standard that should magnify the skepticism. The skepticism isn’t different for vaccines, the legal standard and the safety standard are different.

Vaccines are the only class of pharmaceutical for which a patient cannot sue the manufacturer due to injury. That’s right, Merck has paid out nearly $5 billion in lawsuits over Vioxx for all the damage it caused, but hasn’t paid a penny for MMR vaccine injury or any of the vaccines it produces for the CDC childhood schedule. Instead, the government pays for damages caused by Merck’s vaccine in Vaccine Court.

Additionally, none of the CDC childhood schedule vaccines have been proven safe using a double-blind placebo-controlled safety study. This is purportedly because it is unethical to conduct such a study given the nature of vaccines. But in no other drug class is this an issue. People are dying from cancer every day, yet it is considered ethical to give some of those patients a placebo for an anti-cancer treatment in a study. Yet, for children who don’t have a disease, it’s considered unethical to give them a true placebo instead of another vaccine or worse yet a bunch of adjuvants. Give me a break!

You wonder why people are more skeptical of vaccines? The answer is that there is an insidious legal and medical double standard for vaccines that allows them to be unsafe.