With the recent spat of cancer deaths of celebrities (David Bowie, Alan Rickman, Lemme Kilmister), it’s clear that the disease is still ravaging humanity. In fact, it’s estimated that there will be 600,000 cancer deaths in the US this year—that’s a Civil War’s worth every year. While there are some promising gene-targeting therapies, the most widely-used treatment is a relatively ancient chemotherapy that often does just as much damage as good in its scorched-earth medical technique. We’re clearly losing this war.

And this is a shock because we know what kills cancer. A substance is alkaline (or basic) when the pH is higher than 7. Human blood for instance must stay in a narrow range of 7.35-7.45, which is just barely alkaline). Cancer cannot survive in an oxygenated alkaline environment and will die if conditions are such.

I know because I’ve seen it happen. With a history of basal cell carcinoma, I noticed a lesion that would later be diagnosed as basal cell and applied a paste of baking soda (sodium bicarbonate NaHCO3), which has a pH of 8.4 with a slightly alkaline coconut oil directly on the lesion continuously for a month. The results of this baking soda skin cancer treatment were striking: 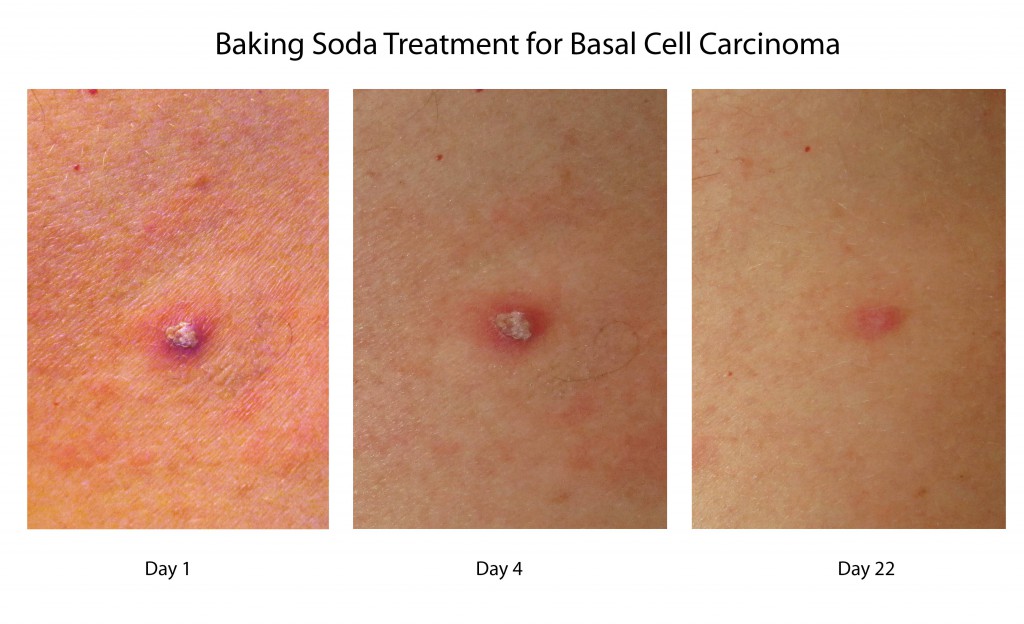 After crusting up and a potent burning sensation, the lesion was almost completely eliminated within 22 days and left the healthy skin surrounding it perfectly fine. It has worked elsewhere on my skin as well and there are other reports of similar findings from others. Unfortunately, it’s clear from my experiment and from other sources I’ve read that the cancer is not completely eliminated through this method, but it is very effective to a point, which shows promise in the principle if not the method.

We also recommend long-term fasting or the ketogenic diet in conjunction with this treatment to inhibit subcutaneous cancer growth. There is evidence that the combined approach could be effective at eliminating the cancer altogether.

If an alkaline treatment can work to kill cancerous lesions topically, the same treatment should work internally as well, hence the whole alkaline food movement.

But just loading up on alkaline/basic foods doesn’t account for the whole picture. As a snarky skeptic may assert that homeostasis is the body’s process for maintaining a balanced pH and would defeat any attempt at raising the body’s pH. Eat more alkaline foods and the body will counteract that to maintain the balance. The snarky skeptic will just laugh it off and deny the possibility of using alkalinity to kill cancer at all. But it’s theoretically possible that you can use homeostasis in your favor by ingesting something like apple cider vinegar (ACV), which has a low pH and could paradoxically trigger an increase in alkalinity in the body to counter it.  ACV has been inconclusively linked to a reduction in esophageal cancer and other cancers. But as Dr. Mercola says, the jury is still out on ACV as a cancer treatment.

However, with such a dramatic effect from sodium bicarbonate topically, I’m convinced that there is a way to increase the alkalinity of the body in order to aid in killing internal cancer as well. It could be as simple as ingesting more baking soda (perhaps indirectly through toothpaste?). One can nebulize baking soda and inhale it for direct application on lung cancer.

In a 2009 study, researchers injected cancer into immunocompromised mice and gave half regular water and the other half a solution of water and sodium bicarbonate. The results were shocking: while both groups showed little effect on the primary tumor, the carbonate-treated mice had dramatically fewer instances of metastases and lived longer.

This type of finding should have been earth-shattering and shows much promise in this field. More studies of this kind need to be done and until they are conducted, we must continue our own experiments. We cannot let the juggernaut-esque medical establishment slow down what could be the simplest and most cost-effective cure for cancer. We haven’t cracked the cancer code, but we’re tantalizingly close.