Stanley A. Plotkin is an American physician who works as a consultant to vaccine manufacturers, such as Sanofi Pasteur, as well as biotechnology firms, non-profits and governments. In the 1960s, he played a pivotal role in discovery of a vaccine against rubella virus while working at Wistar Institute in Philadelphia.

In this letter to the editor, he asserts that the Willowbrook Hospital’s unethical medical experimentation on mentally disabled children is justified, seeing “little danger of overstepping ethical bounds.”

He defends his seeming Nazi-like dehumanizing philosophy by making the distinction that it is not based on ethnic, racial, or economic grounds: 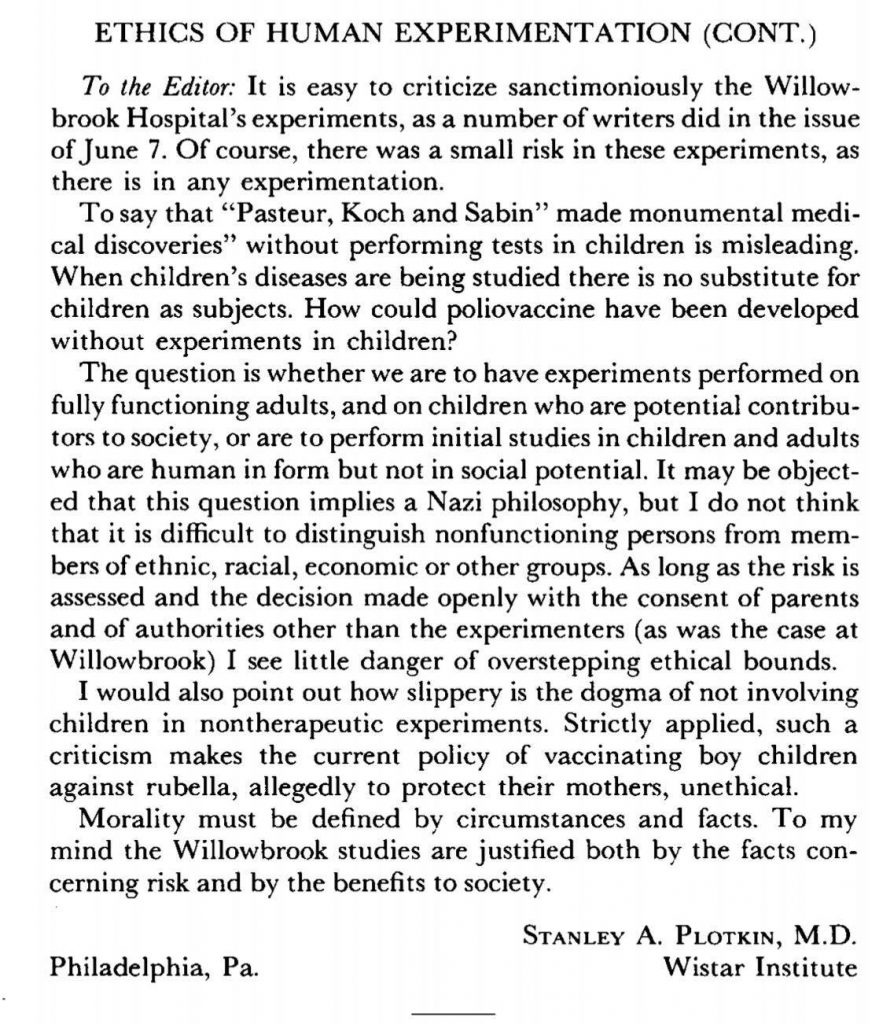 To the Editor: It is easy to criticize sanctimoniously the Willowbrook Hospital’s experiments, as a number of writers did in the issue of June 7. Of course, there was a small risk in these experiments at there is in any experimentation.

To say that “Pasteur, Koch and Sabin” made monumental medical discoveries” without performing tests in children is misleading. When children’s diseases are being studied there is no substitute for children as subjects. How could poliovaccine have been developed without experiments in children?

The question is whether we are to have experiements performed on fully functioning adults, and on children who are potential contributors to society, or are to perform initial studies in children and adults who are human in for but not in social potential. it may be objected that this question implies a Nazi philosophy, but I do not think that it is difficult to distinguish nonfunctioning persons from members of ethnic, racial, economic or other groups. As long as the risk is assessed and the decision made openly with the consent of parents and of authorities other than the experimenters (as was the case at Willowbrook) I see little danger of overstepping ethical bounds.

I would also point out how slippery is the dogma of not involving children in  nontherapueutic experiments. Strictly applied, such a criticism makes the current policy of vaccinating boy children against rubella, allegedly to protect their mothers, unethical.

Morality must be defined by circumstances and facts. To my mind the Willowbrook studies are justified both by the facts concerning risk and by the benefits to society.