The current pertussis vaccines approved and used throughout much of the world (acellular pertussis in DTaP) has been shown to lead to asymptomatic transmission to others, leading to horrifying cases of pertussis in younger infantile siblings of children who had recently received the vaccine. Now, researchers have found that the same vaccine actually makes the vaccinee more susceptible to pertussis over their lifetime:

This finding illustrates the difficulty in the vaccine discussion. Not all vaccines are alike—even for the same target disease. When someone claims flatly that “vaccines work” he is perpetuating a fallacy about vaccines.

The history of the pertussis vaccine is fascinating:

Effective diphtheria, tetanus toxoids, whole-cell pertussis (DTwP) vaccines became available in the 1930s, and they were put into routine use in the United States in the 1940s. Their use reduced the average rate of reported pertussis cases from 157 in 100 000 in the prevaccine era to <1 in 100 000 in the 1970s. Because of alleged reactions (encephalopathy and death), several countries discontinued (Sweden) or markedly decreased (United Kingdom, Germany, Japan) use of the vaccine. During the 20th century, Bordetella pertussis was studied extensively in animal model systems, and many “toxins” and protective antigens were described. A leader in B pertussis research was Margaret Pittman of the National Institutes of Health/US Food and Drug Administration. She published 2 articles suggesting that pertussis was a pertussis toxin (PT)-mediated disease. Dr Pittman’s views led to the idea that less-reactogenic acellular vaccines could be produced. The first diphtheria, tetanus, pertussis (DTaP) vaccines were developed in Japan and put into routine use there. Afterward, DTaP vaccines were developed in the Western world, and definitive efficacy trials were carried out in the 1990s. These vaccines were all less reactogenic than DTwP vaccines, and despite the fact that their efficacy was less than that of DTwP vaccines, they were approved in the United States and many other countries. DTaP vaccines replaced DTwP vaccines in the United States in 1997. In the last 13 years, major pertussis epidemics have occurred in the United States, and numerous studies have shown the deficiencies of DTaP vaccines, including the small number of antigens that the vaccines contain and the type of cellular immune response that they elicit. The type of cellular response a predominantly, T2 response results in less efficacy and shorter duration of protection. 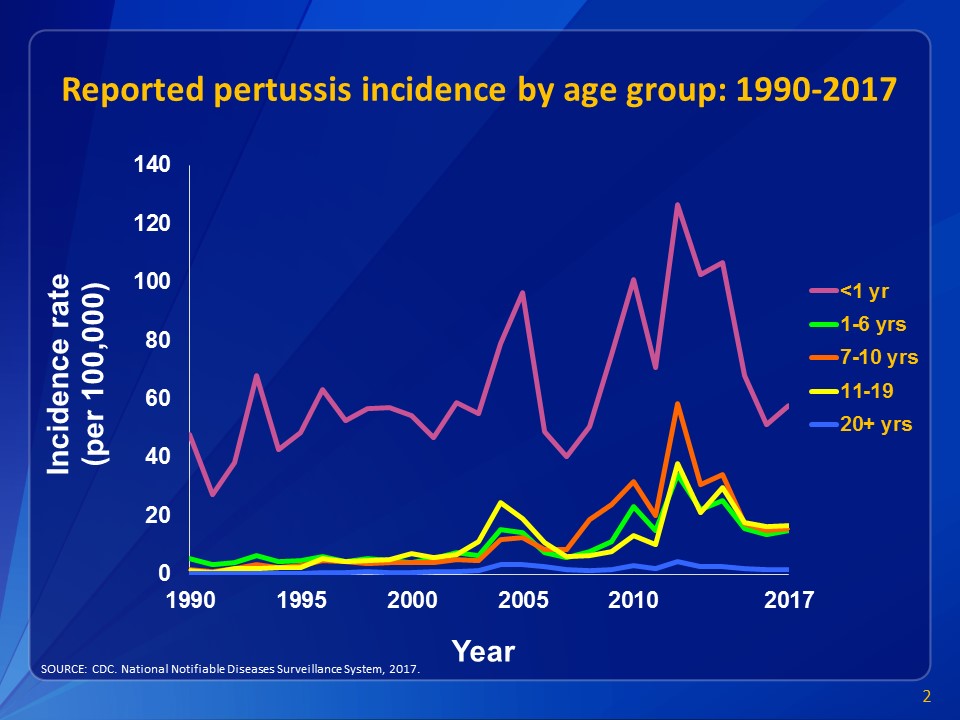