Science Balto: Just About the Dumbest Pro-Vaccine Fallacy Ever

Balto: Just About the Dumbest Pro-Vaccine Fallacy Ever

We’ve seen some pretty bad logical fallacies from the pro-vaccine side of the immunization debate. But this Balto one takes the cake: 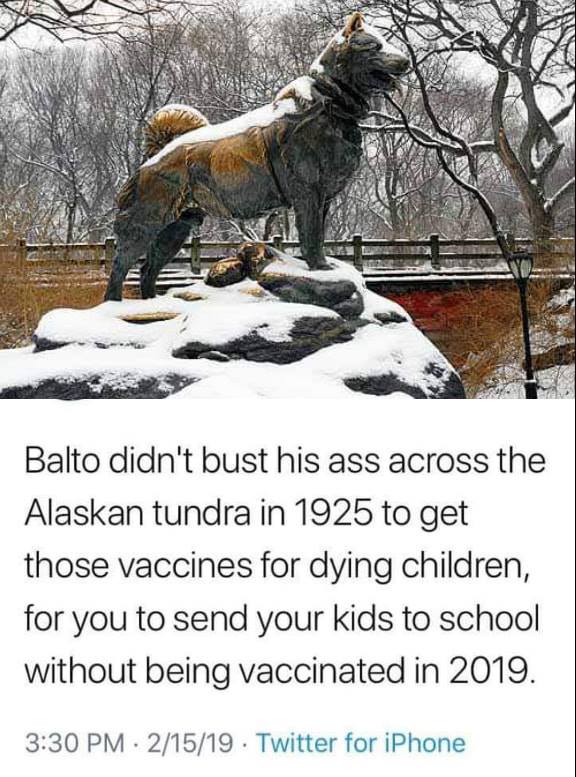 First of all, leaving aside the fact that Balto didn’t get vaccines to any kids. The dog was part of the 1925 Serum Run to Nome, which got diptheria antitoxin serum (a treatment, not a vaccine) to kids who were suffering from the disease.

Also, leaving aside the fact that medical professionals don’t use that serum anymore due to the side effects (something that won’t happen with vaccines because in the US because of the legal double standard that pervades here).

And leaving aside the fact that there have been a lot of animals used in the development and distribution of medicine and Balto wasn’t even the lead dog (Togo) and didn’t do anything particularly admirable considering all the animals that have died in the service of medical research.

The point is the nothing anyone or any animal has done in the past should mean that you or anyone else should inject anything in your body without your consent. An apt reply to the Balto argument would be:

The millions of soldiers who fought and died in the War for American Independence, the Civil War, and World War II didn’t bust their asses across the country and the world protecting freedom for you to shame people who exercise theirs.

The hundreds of people who died in the Tuskegee syphilis experiment didn’t die so that more could become victims of unnecessary and unwanted medical intervention.

And the countless lives lost and debilitated at the hands of the medical establishment pushing a one-size-fits all vaccine program will not be in vain. We have seen your sacrifice and will not take it for granted.