It happened yet again. On November 8th, Americans had to witness another tragic scene of innocent people being killed at the hand of a sociopathic maniac—this time in the safe confines of Thousand Oaks, California, once considered America’s safest city. And, just like clockwork, calls for banning guns came from all directions. But guns have been a part of American society since its inception, yet these types of despicable mass shootings have only become a regular occurrence in the last twenty-five years. Why? 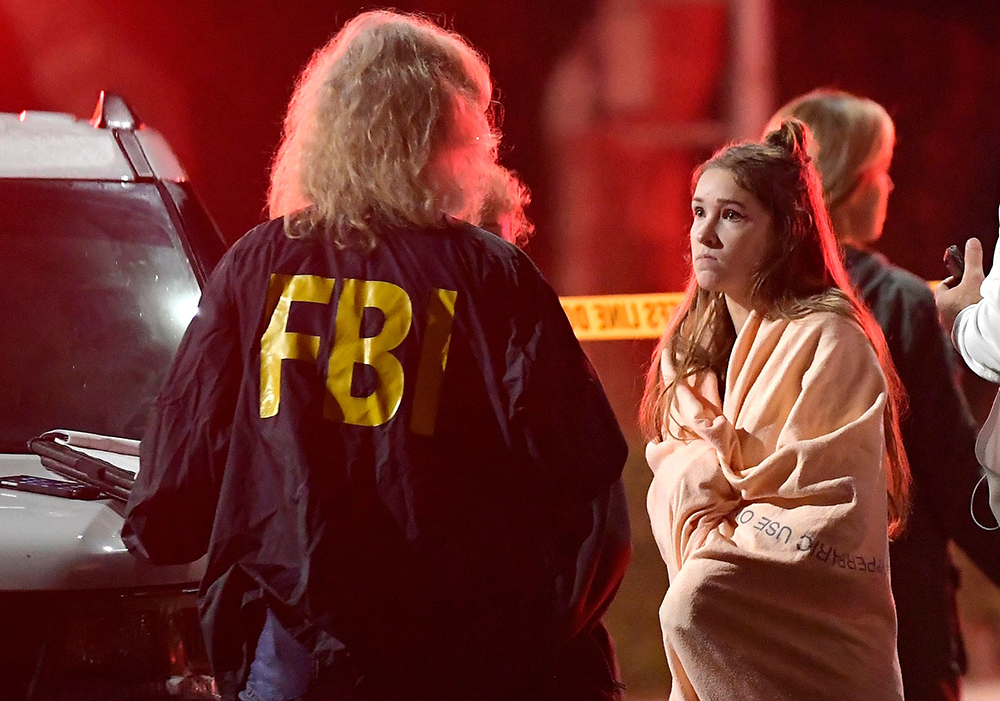 Credit: Photo by Mark J Terrill/AP/REX/Shutterstock (9970720c)
An FBI agent talks to a potential witness as they stand near the scene, in Thousand Oaks, Calif. where a gunman opened fire Wednesday inside a country dance bar crowded with hundreds of people on “college night,” wounding 11 people including a deputy who rushed to the scene. Ventura County sheriff’s spokesman says gunman is dead inside the bar
California Bar Shooting, Thousand Oaks, USA – 08 Nov 2018 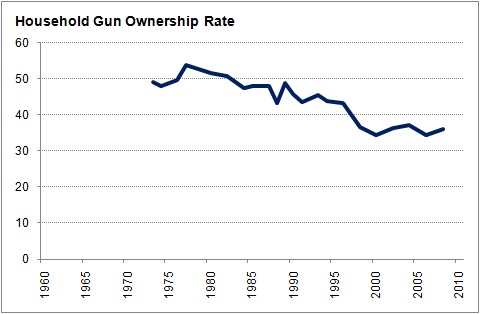 Could it be that more people are carrying guns or perhaps more people own guns illegally? But gun ownership has gone down the same time that violent mass shootings have increased.

Well, we still have too many guns, some will claim. Other countries like Great Britain have outlawed guns and there are only a handful of firearm deaths per year there, whereas, the United States has over 10,000 a year. But Mexico also has outlawed guns and it has a higher rate of death by firearms (11.14 per 100,000) than the United States (9). On the other side of the argument, nearly every adult in Switzerland receives a firearm as part of their mandatory conscription service, yet their rate of firearm homicide is relatively non-existent compared to ours.

According to these numbers, the availability of guns and the legality of firearms is not what makes for a sociopathic, violent country in which people go on horrific rampages. There must be another reason why this is happening.

Many people have raised the possibility that psychiatric medications may be to blame for the mass shootings and the data is pretty damning. Medical records for those involved in criminal acts are often sealed but in at least 66 cases of school violence and countless non-school shootings, the assailant had been on or was in withdrawal from FDA-approved psychoactive drugs, including Columbine, Virginia Tech, and now Newtown, Connecticut. Given that a fifth of all military veterans have depression and/or PTSD, it wouldn’t be surprising if the Thousand Oaks shooter Ian Long—a veteran of Afghanistan who likely suffered from post-traumatic stress disorder—was on antidepressants often used to treat the disorder.

But correlations doesn’t imply causation. What would the causal mechanism be? First, antidepressants don’t do what they’re supposed to do and second, they dehumanize people in the mind of the patient and increase the risk of violent behavior.

Antidepressants don’t fix a chemical imbalance; they cause one

As we detailed in Paleo Family, the field of psychiatry has a long history of stumbling upon drugs that have certain therapeutic effects, then prescribing those drugs for conditions which may or may not have anything to do with the symptoms that are being used to treat. This unscientific approach has made mainly Americans mental guinea pigs to test psychoactive chemicals and the results have been disturbing to say the least. Modern selective serotonin reuptake inhibitor (SSRI) antidepressants don’t fix the supposed underlying issue of a chemical imbalance (this theory is unfounded); they create one. Neuroscientists Jeffrey Lacasse and Jonathan Leo explain:

Contemporary neuroscience research has failed to confirm any serotonergic lesion in any mental disorder and has in fact provided significant counterevidence to the explanation of a simple neurotransmitter deficiency.

Modern neuroscience has instead shown that the brain is vastly complex and poorly understood. While neuroscience is a rapidly advancing field, to propose that researchers can objectively identify a “chemical imbalance” at the molecular level is not compatible with the extant science. In fact, there is no scientifically established ideal “chemical balance” of serotonin, let alone an identifiable pathological imbalance.

In 2003, Giovanni Fava posed the question,  Can Long-term Treatment with Antidepressant Drugs Worsen the Course of Depression? He answered that in the affirmative:

Antidepressants increased manic behavior in depressed patients and made them dependent on the drugs causing severe withdrawal symptoms. They also made healthy people depressed and some suicidal. He wrote, “The correlation between duration of antidepressant drug treatment and likelihood of relapse on discontinuation may suggest that it is not simply a matter of failure to protect, but that a neurobiological mechanism increasing vulnerability may be involved.”

In other words, antidepressants supposedly designed to correct a chemical imbalance actually end up causing one.

As psychiatrist Julie Holland explains, she’s had patients tell her that they’ve tried antidepressants but they made her feel like a “zombie.” She relays what one patient told her, “I was in a situation in which I knew I should be crying but I couldn’t.”

This so-called emotional blunting is a common side effect of antidepressants:

This lack of empathy can be extremely troubling when considering harm done to people. One patient told Dr. Holland, “I cut my finger and I saw that it was bleeding but I didn’t really feel connected to the finger or the blood.”

Many antidepressants also have the adverse side effect of akathisia, a movement disorder characterized by a feeling of inner restlessness and inability to stay still. People may fidget, rock back and forth, or pace. Others may just feel uneasy but some—particularly those with a specific gene mutation—have an increase risk of suicidal or homicidal ideation. Many antidepressants carry the FDA black box warning: 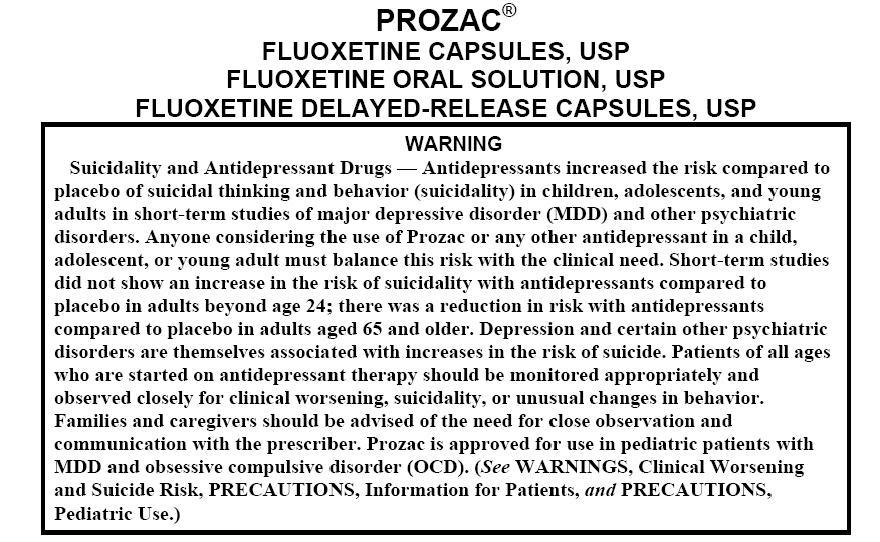 In the 2010 book, Anatomy of an Epidemic, Robert Whitaker details the negative psychological cycle caused by psychoactive drugs like Prozac (fluoxetine). Psychoactive drugs are mysterious chemicals that materially alter the brain’s physiology, sometimes reducing depression and psychotic behavior, but also causing adverse side effects. Whitaker reveals that by 1990, so many people had suffered adverse effects from taking the pharmaceutical that a Prozac Survivors Group had been started and the European Union has banned Prozac outright due to the fact that

“Antidepressants increase suicidal thoughts and suicide attempts among children and adolescents, and should not be used to treat depression.”

The Citizens Commission on Human Rights has detailed the effects of antidepressants and other psychoactive drugs in a recent report. In it they show the long tragic list of horrible violence attributed to the drugs and the subsequent coverups.

Psychiatrist Peter Breggin explains, “One of the things in the past that we’ve know about depression is that it very, very rarely leads to violence. It’s only since the advent of these SSRI drugs that we have murderers—sometimes mass murderers—taking antidepressant drugs.”

Given all of these data, it’s clear that antidepressants are a large if not the largest factor in the modern epidemic of mass shootings. Antidepressants cause a chemical imbalance in the patient, which dehumanizes people and increases the likelihood of violent behavior. These psychiatric drug cocktails may improve symptoms in some people but are on the whole a recipe for disaster and until we can face this problem for what it is, we’re going to continue to endure losing loved ones in senseless tragedies.