Why Are More Teen Girls Depressed?

The new book Coddling of the American Mind, authors Greg Lukianoff and Jonathan Haidt argue that several factors are setting kids up for failure in college. One of the factors is overuse of mobile device technology and specifically social media and its affect on major depression.

We describe the risks associated with too much device usage in Paleo Family, but Lukianoff and Haidt point to a study by Jean Twenge that links too much social media to increased depression. Lukianoff and Haidt  argue that the first kids who were raised with a cell phone in their pocket (the Internet generation born in 1995 and after) saw increased rates of depression and suicide in their college years: 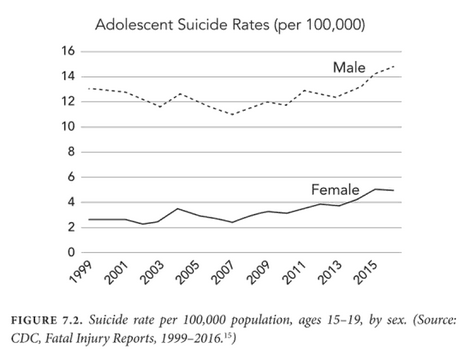 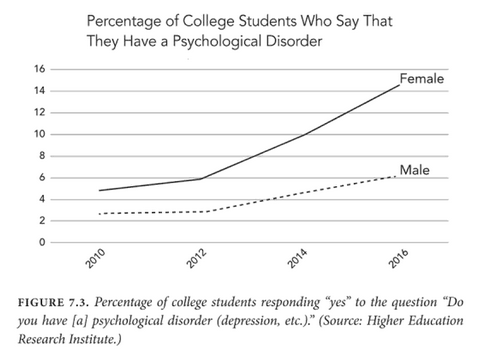 One thing you’ll notice in the charts is that females seem to have fared worse in this demographic. The authors argue that the social-heavy Internet experience of the youngest generation affects girls more and that’s why their risk of psychological disorders—specifically depression—has increased so much more.

We propose that another factor may be increased usage of hormonal contraception in teenage females as that pharmaceutical has been associated with an 80 percent increased risk of depression in teens, obviously only affecting girls.

Another factor that the Coddling authors don’t mention is an increase in the general willingness to diagnose and prescribe antidepressants for teens in general. A Blue Cross and Blue Shield report showed that diagnoses for major depression across all age groups in the US has increased 33 percent over the same time period in question (2013-18). Adolescent girls are still disproportionately suffering more, but there is a clear universal increase that can’t be explained completely by iPhone presence and the current treatment regimen of psychoactive drugs and enabling mechanisms at American universities does not seem to help the situation. As Robert Whitaker describes in Anatomy of an Epidemic:

First, by greatly expanding diagnostic boundaries, psychiatry is inviting an ever-greater number of children and adults into the mental illness camp. Second, those so diagnosed are then treated with psychiatric medications that increase the likelihood they will become chronically ill. Many treated with psychotropics end up with new and more severe psychiatric symptoms, physically unwell, and cognitively impaired.

The increase in depression in teenage girls and young women should be one of the top priorities of population health officials, yet it appears to have been brushed under the rug. If you’re interested in preventing the fate in a girl you know, we reiterate Lukianoff and Haidt’s recommendation to limit screen time/social media to 2 hours per day for adolescents and add two more recommendations: 1) find a natural birth control method not associated with depression and 2) utilize cognitive behavioral therapy instead of antidepressant drugs to treat depression.