Six cases of the measles have been confirmed in Texas in recent days, health officials say, two adults and four children. Unlike the outbreak in Washington, however, this outbreak seems to be in people who have previously been vaccinated.

All four of the children had gotten the first of the two doses, the Houston Chronicle reported. County officials were working to confirm that the woman had been vaccinated.

Two of the children had recently been immunized.

Two of the four children had recently been vaccinated. Texas Department of State Health Services spokesman Chris Van Deusen said, “likely were exposed to measles before receiving the vaccine or before the body could mount a full immune response.” 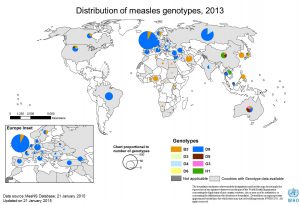 There are at least 24 different genotypes of measles and are restricted to a specific part of the world, such as:

In countries that have eliminated measles, like the United States, the genotypes that are found will depend on from where the measles strain was imported.

According to the CDC, the US MMR vaccine includes the Moraten strain, which is of the genotype A. In fact, “All vaccine strains… are in genotype A.”

So, it shouldn’t be difficult to determine whether the disease is being shed from recent vaccinees or being contracted from someone who has recently spent time in a foreign country, if the health officials care to look.