Is there a natural ADHD cure? We seek to answer that in this excerpt from Paleo Family.

Our first son is a bit high-strung. From the time he was kicking and punching in the womb like a prenatal Kimbo Slice to the time he came wailing into the real world, it was clear that he was going to be a handful. He has always seemed to be embroiled in an epic battle. Sometimes in the middle of the night we weren’t sure if we had a baby in our room or a hatching velociraptor. By the time he was one, he was throwing temper tantrums like a professional. Whenever he didn’t get what he wanted he would produce unbelievably annoying pitch of a whine, arch his back, and cry like a wild banshee. The little guy is constantly in motion and active. He is always making noise, babbling, bouncing off the walls. Just watching him is enough to wear you out. I wouldn’t be surprised if a psychologist would diagnose attention-deficit/hyperactivity disorder (ADHD) after watching him for just a few minutes.

But an amazing thing happens when we take him outside. When he breathes that first breath of fresh air and sees the tall pines dancing in the sun, he transforms into another person. He becomes calm, focused, and fascinated by everything around him. He loves looking at the trees, imitating the ducks flying overhead, and most importantly, picking up rocks and playing in dirt. It’s almost as if he was made to be outside.

And it’s not just my first child who’s like this. There’s a growing body of data that points to the fact that all humans feel better, think better, and perform better when we spend more time outside. Unfortunately, no one seems to be getting the message.

American children spend less than half as much time outside as their counterparts 20 years ago. Instead, they’re inside watching television, playing video games, or using a computer or tablet. Common Sense Media reports that 30 percent of U.S. children first play with a digital device while they’re still in diapers. And the Pew Research Center finds that nearly three out of four 13- to 17-year-olds have smartphones, 24 percent saying they use their phones “almost constantly.”

And all of this indoor, electronics-heavy time is taking its toll on our collective health—especially for children. Most importantly, unless the video games are on a Wii or Kinect, use of electronic devices means sitting still. Data show that just being indoors reduces physical activity of a child up to 75 percent.

Parents are even having to deal with “tablet addicts” who cannot be torn away from their device. There’s a program in the UK designed specifically for technology addiction in children. Dr. Richard Graham, who heads the program said that the children, “Can’t cope and become addicted, reacting with tantrums and uncontrollable behaviour when they are taken away [from their tablet].”

Not coincidentally, parents have been noticing increased inattention, hyperactivity, and impulsivity in their children. This increase in symptoms has, predictably, led to an increase in diagnosis of ADHD, making it the leading behavioral disorder among youths aged 4 to 17 years.

Obviously that type of behavior isn’t acceptable in a civilized setting, so parents are seeking treatments. According to the CDC, common treatments for ADHD include behavior therapy, school accommodation and intervention, and, of course, medication. Behavioral therapy for ADHD includes stricter organization, using rewards for positive behavior, and being clear about rules and punishment. School accommodation and intervention includes greater communication between teacher and parent, making lessons shorter, and giving positive reinforcement. If the behavioral therapy doesn’t work, doctors seem more than willing to prescribe medication for the condition. FDA-approved ADHD medications include Ritalin, Focalin, and Concerta, which are all nervous system stimulants with different delivery mechanisms; Adderall, which is a mixed amphetamine salt; and Strattera, which is a specific noradrenergic reuptake inhibitor, similar to some anti-depressants.

Want to know what’s not listed as a possible treatment in the CDC recommendations? That’s right: spending time outdoors. Yet, that is looking like the most effective treatment for ADHD symptoms.

A recent study in the Proceedings of the National Academy of Sciences showed that a 90-minute walk through a natural environment dramatically improved mental health, reducing the negative thinking or rumination associated with clinical depression. Another study published in the Public Library of Science showed that if you increased your time in a natural environment to four days, you receive added benefits, namely an increase in performance on creative, problem-solving tasks. In the study, people who had gone on a 4-day hike in the wilderness without electronic devices scored 50 percent better on a test known as RAT (Remote Associates Test) where the subject is given three words (sleeping, bean, trash) and asked to find the connecting word (bag). A 50 percent increase in performance is amazing on a test like that and all participants had to do to improve their mental ability was take a walk outside.

In 2004, Kuo and Taylor showed in yet another study that activity in nature reduced the symptoms specifically associated with ADHD (difficulty in remaining focused on unappealing tasks, difficulty in completing tasks, difficulty in listening and following directions, and difficulty in resisting distractions). In the study, ADHD-diagnosed children participated in common after-school or weekend activities in different-sized groups and in different locations. The data showed a couple things: 1) activities in which the child was alone or with one other person reduced symptoms more than activites with larger groups no matter where the activity was held and 2) activities held outdoors reduced symptoms dramatically more than those held inside.

What’s more is that activities in natural (“green”) environments were better than activities that took place inside or in man made outdoor settings: the greener—more natural—a child’s typical play settings, the less severe his or her general symptoms.

The conclusion to all of these studies is something that any REI shopper could have told you without all the scientific data: being outside is good for you and could quite possibly be the cure to the most diagnosed mental conditions in America. Feeling agitated, scatter-brained, or fidgety? Go outside!

Why is it so beneficial? Some contend that natural stimuli are both emotionally positive and low-arousing and that man made environments littered with technology are more stressful and demanding, requiring, “that we attend to sudden events, switch amongst tasks, maintain task goals, and inhibit irrelevant actions or cognitions.” So, the great outdoors is great, basically because it’s relaxing. And when you actually get down and dirty, whether by playing or gardening, there are even more benefits. Studies have shown that bacteria found in dirt may improve mood and learning.

Of course, that’s not always the case. There are dangers and risks associated with going outside. For instance, just before writing this, my son uncovered a colony of fire ants under a branch in a nearby field and thought it was a good idea to investigate by sticking a smaller stick into the jittery mess. He ended up getting bitten several times and had to endure some swelling and pustules. There are also venomous snakes, lightning, and harmful UV rays from the sun outside. And where I live in Louisiana, there’s that precambrian monster known as the alligator that no doubt looks at little children like we look at boneless chicken wings with lemon pepper sauce. I’m not trying to be pollyannish about the great outdoors, but it’s clear with the proper precautions to mitigate the risks, it could be the answer to a lot of mental and physical problems.

We’re finding with every study conducted, man has made the artificial world he spends increasingly more time in, but he is clearly not made for it. We can work on iPads, phones, and computers all day, but our mental health suffers. We can endure the morgue-like environments of our offices but don’t truly feel alive until we get that break to walk outside.

Most importantly, this is a man made problem but we can’t expect a man made cure. The answer isn’t another pharmaceutical pill, the answer is a large dose of nature, stat. I can say with all earnestness that there is more mental health cure found in a pile of dirt than in all the behavioral therapy and drugs in modern medical science.

Walking through the fields Santa Barbara County Shores Park is beautiful even when the skies are grey. 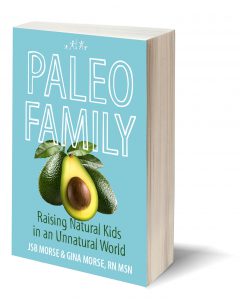